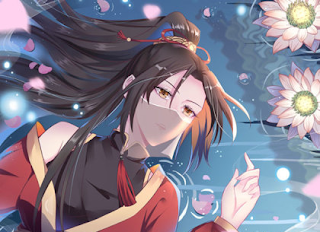 Note: The author can't seem to decide if the MC's mother's name is Wanrou or Wanrong.

1291
It was mentioned that the Emperor gave the Prince a 6th rank pill which allowed him to recover his injuries overnight and because he did this, the Grey Wolf and the others thought that if something happened later the Emperor and the ML might become unreconcilable.

When the MC entered the hall, all eyes fell on her. Ying Xue, the third princess, twisted her sleeves. She was self-confident that her beauty was unparalleled, but today she saw the MC, who didn't even show her face, already surpassed her.

1303
Uncle Han (Han Rong), the person in charge of the prison doesn't like the ML being with the MC.

1307
Because of Han Rong, the MC said, "I haven't married you yet and trouble have already come knocking on my room. I have you reconsider if I want to marry you!" She then turned around and walked away.

A day later, Han Rong tried to give the MC 4 woman as an "apology." He also arranged for the 4 women to seduce the ML. The MC named them Spring, Summer, Autumn, and Winter.

One of the 4 ladies used the MC's name to try and deliver food to the ML. The ML ignored the woman while the MC was sitting on a tree watching her. She then taught the woman a lesson.

When Han Rong found out, he tried to blame the MC for trying to kill the lady as a reason to kill the MC. Since Han Rong saved the ML and his mother once, Han Rong thought that the ML would side with him. When the ML arrive just before Han Rong dealt a heavy blow to the MC, but the MC was able to take care of Han Rong on her own.

The ML then destroyed Han Rong's cultivation and banned him from ever entering the city again. Han Rong immediately turned into an old man and was dragged away by the ML's subordinate while glaring at the MC. The other 3 ladies then confessed what Han Rong told them to do in fear of what the MC might do to them.

1323
The Emperor, Xuanyuan Moze's father, was just testing the MC. When Han Rong tried to kill her, the Emperor was really angry and he was satisfied with his son's punishment.

The MC said she will be leaving. She has already lived in the ML's house for two months. The ML asked her to stay for a couple of more days. The MC agreed to stay 2 more days and ML said he will take her around to play.

1340
MC left the ML's house. She went to a small town but when she entered, she felt like she was the only one in town.

MC met a strange old woman. She refined ghosts and turned them into Spirit Souls. The person drained the blood in every person in town and trapped them in town as spirits with a formation.

After the lotus absorbed the old woman, she saved someone stuck inside a water tank/drain, Zhu Ye.

1371
When a random doctor saw the MC's needlework/attack, the doctor asked for the MC to assist him in an operation. But when it was time for the operation, the doctor was too nervous so the MC took over his job. After MC saved some random Lord, she stole some valuables such as herbs and other treasures. When the Lord woke up and the subordinates told him what happened, the Lord said not to chase the MC for she saved his life.

The MC then went to the place that took away her mother and accidentally met one of its members, Luo Heng and helped him kill a murderer. Thanks to him, she got into the place as an errand runner. There were a total of 9 peaks or mountains in Dan Yang Sect. The MC worked her way up from being a guard at the herb farm to delivering potions to the 8th peak where her mother was staying. While she was guarding the herb farm, she accidentally tamed a chicken and named it Lu Mao. The MC met Chen Dao, an alchemist who lived in the 7th peak. With his help, she was promoted. The MC saw her mother when she delivered potions to her.

The MC, Chen Dao and Luo Heng went to a forest to gather herbs along with the other sect members. When she saw signs of a bear, she told Chen Dao, who was the senior out of the three, and told them to go ahead and she would try and hold the bear back.

When the MC found the bear, she wanted to matchmake it with her black bear, Little Black.

The people in the forest encountered an animal tide. But because the MC and her mother were up on a hill, they were not affected. Chen Dao, however, tried to save someone whom he treated as a brother, only to be pushed off his flying sword and fell to the ground, hurting his spine.

Chen Dao was depressed and the MC said that she would be able to treat him in three months. At the same time, the Master of her mother, San Yangzi, gave Shangguang Wanrong an ultimatum. She had to advance to Yuan Ying stage or else he would send her to a dangerous land for "experience."

Three months later, Chen Dao was feeling much better and the MC's mother had advanced. She was then sent out to travel the world to gain some experience. Shangguang Wanrong asked her senior brother, Duan Mubai, to help her take care of the MC when she's gone/if something happened to her.

The moment Shangguang Wanrong left the sect, the master captured her. Swallowing Cloud tried to stop him and injured him but San Yangzi used some kind of powder to get away. He then started to torture her by whipping her to get her blood and refined her into a pill. He was afraid of dying, so he was going to take the pill to prolong his life.

When Duan Mubai insisted on visiting him and going inside his room, San Yangzi heavily injured him. Ruan Zhangchun, who came together with Duan Mubai and also a friend of his, pretended to be a loyal subject of San Yangzi to safely take away Duan Mubai before making a plan to save Shangguang Wanrong. But the MC was faster than him.

The MC set fire to all the peaks and battled against San Yangzi, an Ascended Immortal. She asked Swallowing Cloud to take her mother far away when San Yangzi lit up an emergency signal. The MC battled against the leader of the sect and their elders. She tried telling them why she killed San Yangzi but they didn't care to listen after seeing her ancient sword.

1522
When they returned to the MC's house, she slept for two whole days. The MC then introduced the ML to her mother. Shangguang Wanrong told the MC that she shouldn't act too intimately with a man. The ML was nervous in meeting his future mother-in-law. In the end, Shangguang Wanrong approved of the ML after she was told that the ML had already met with her father and grandfather.

Because Shangguang Wanrong was severely injured from San Yangzi's torture, she needed some herbs to heal her and asked the ML for help. The ML said he had to leave because a problem came up and Grey Wolf and the others would not be able to take care of it on their own. The ML also showed a map to the MC. The map showed that the western end belonged to the Eight Empires. As for the east, it belonged to the lower reaches (lit translation).

1527
A man by the surname Ni came to the MC's shop to buy a potion. The potion cost 1 million gold and can only be purchased if the person had a black wooden plaque with the Ghost Doctor's emblem. When the MC and Du Fan were on their way to the Black Market, Mr. Ni and two of his people tried to follow them. But when the MC and Du Fan reached the entrance of the Black Market, Mr. Ni called it off because he didn't think it was the Ghost Doctor and they didn't want to annoy them.

The MC asked the manager of the Black Market, surname Shao, to meet with the president but the president was not in. Manager Shao promised that the Ghost Doctor will be immediately notified upon the president's return.