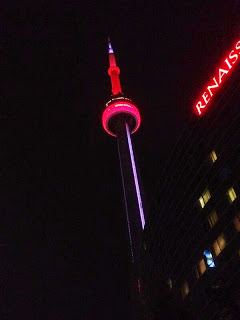 To congratulate my cousin in passing his driver's license exam, we took a road trip to downtown Toronto. Since it was his celebration, he got to decided our destination and drove there.

Everything was cool until we hit the highway. Although we expected some traffic, it was unlike any other you would have encountered on a normal weekday. In the end we took almost 5 hours to go there, eat, and drive back home. Was it worth it? Definitely not. We should have drove to Ottawa instead. At the very least, the view would have been nice.

On a side note, I can't believe it's been so long since my last post. I have already finished my last year of research. Starting next year, I will be on my way to being a Math/Economic Professor! I kid. I have to fulfil my requirement of teaching for a year to get my degree.

Will this affect Japtem somehow? I don't think so. Since it didn't affect Japtem such even when I was sleeping 1 hour a day, so I would it when I get more sleep? Then again, I might get addicted to sleep...