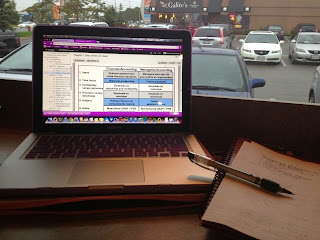 I've thought about it over and over again. Not matter how I put it, it was extremely hard for me to fulfil my promise of blogging every single day. I just don't have the time for it. Since I've learned my lesson, for next year, I'll try to keep it to a minimum of at least one blog a week. I think I can keep that. Hahaha.

On to real life matters, after getting a recommendation for the PhD program, I thought my workload would increase by five-fold. Apparently, that's not the case at all. We've been given an assignment to research the economic growth 10 years in the past, and predict the economy for at least 5 years into the future.

It's pretty interesting stuff. Since most of the stuff can be done individually, I don't see the people in my group often, though I still speak to my partner in crime about our progress. Our place of preference — Second Cup.

We've found that investment in the United States and Europe will be profiting in the next couple of years. So for those people who wants to invtest their money, that's the country to invest in. The Canadian market however, isn't doing as well as we'd hope, but we're slowly getting there.

I've also had a couple of free time, so I decided to spend it translating novels. I guess all die hard Moonlight Sculptor and Kill No More fans would be happy to read a few new chapters.